Snorkel with the Manatees

Caye Caulker North Channel is the first stop of the trip, a cut on the reef which is home to various colorful corals and sea creatures. While snorkeling and exploring this beautiful reef cut you can be on the look out for the manatees which often swim this area. There is a 99% chance of encountering and swimming along with the manatees. These casual creatures are slow swimming mammals, gliding at 5 miles an hour or a bit more. The population of these animals has declined significantly worldwide throughout the past century because of hunters killing them for their oil, bones and hides. They are an endangered specie protected by law.

The following stop of the trip is at Corals Gardens. A small concentration of very colorful corals along the reef, it is an area known for the vibrant corals formations that it holds. As you dip into this shallow patch of reef you will notice the corals close to the surface and their colors completely exposed by the sunlight. Search for exotic fishes in between the coral branches and formations. 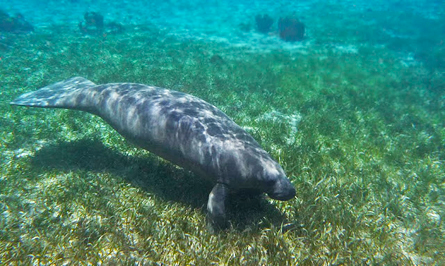